Adoption can be expensive. It costs about $25,000 for domestic infant adoption. After our first information gathering meeting at Bethany, we were overwhelmed with the cost and discouraged knowing we certainly didn’t have that kind of money. 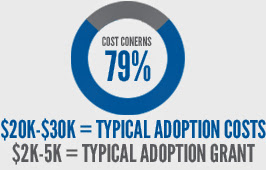 33% of Americans consider adoption. 79% of those are concerned about the costs, the biggest deterrent. Less than 2% adopt. (Source: Abba Fund)

The cost almost deterred us. Matt came to realize if we waited until we had all the money and even tried to plan where it would come from, we would never start the process. He decided since we were in a stable place financially, we needed to start down the path and see how God provided. So that’s what we did.

A few days after getting approval of our formal application, I contacted my talented hair stylist and good friend, Melissa, about doing a fundraiser through the salon where she worked. She eagerly agreed and along with friends who made delicious refreshments to sell and other generous vendors who donated portions of their proceeds, they helped us raise almost $2,000. The big fundraising ball was rolling!

Then another friend from church approached us about holding a fundraiser and selling health and beauty products from her company and donating the proceeds to our adoption fund.

And God kept providing through donations in all amounts. We received financial gifts from our fundraising website, some from sweet kids who raised money from their lemonade stand, a large amount from my mom and step-dad’s church, a few thousand from a concert my step-dad held, and another several thousand from our dinner at CBC. People contributed goods to raffle and a family from church who owns our favorite Mexican restaurant in Metro Detroit had a day in November when they gave us a portion of their proceeds from sales. We sold tshirts with our “Together We’re Loud” logo and had various people sacrificially give a few hundred or thousand dollars here and there. Then we were so encouraged to learn in February of this year that we were awarded $6,000 through Steven Curtis Chapman’s Show Hope Grant.

We read books and blog posts about debt-free adoption before we got started which were very helpful. We also learned a little along the fundraising way ourselves. (Just to be transparent, we are hoping to have a debt-free adoption, but have incurred approximately $2,000 more in fees from our transfer, so we will see how it all works out in the end.)

1) It is hard work. I likened it to adding on a part-time job. So many details to plan, things to organize, and thank yous you don’t want to miss. Like most work, there is profit in the end, but it really is just plain old work.

2) We couldn’t have done it without a huge support network. We had many dear friends from the church of which we were a part during Matt’s seminary years who came to several events. We had amazing support and generosity from our beloved church, CBC. They let us hold several events at the ministry center which cut down on our needing to incur costs in renting a facility. And there were other friends and family near and far who gave monetarily, but also let us borrow tables and chairs, gave discounts on tshirt printing, and offered free design services. We were humbled to see so many people join together to help us raise money.

3) Although many people were supporting us personally, we were given a platform to help promote adoption and orphan care. We learned so much in the process and I hope we were able to spur others on in living out pure religion from James 1:27, to take care of the fatherless.

4) To get money, you have to have money. Most grants are looking for substantial efforts on your part indicating you have done all you can to raise as much money as you can before asking them for money. They also want to see that you do an adaquate job managing your personal finances, show financial need, but don’t already carry debt. It seems to be a tricky balance. Also, it does help to have good friends who volunteer at the Show Hope table at Steven Curtis Chapman’s concerts to put in a good work for you so that Mary Beth herself might look at your application. (Thanks, Troy and Mal!)

5) In much the way physical child birth strips you of your dignity, all the bearing of personal information in the adoption process forces you to be an open book. The level of financial detail some grant applications go into is crazy, let alone all the essays you have to write about why you want to adopt, how you’ve prepared, your spiritual journey, your theological persuasions, etc. I like writing and it was tedious and a bit intrusive even for me! (Although I do understand why it needs to be that way.)

6) The place of need has been a good place to be. As nerve-racking as it is to know that $25,000 bill is coming due, God has given us much grace as we stepped out following him not knowing how we would make all the ends meet. It has been a chance for us to see his kindness, goodness, and generosity to us through others. Our kids have seen him directly provide our adoption needs, so much so that Stella said, “I want to be more generous to others like others have been to us.” Sometimes I tend to think that giving of our resources is the best way to teach our kids generosity, but God has shown us that humbly receiving generosity is also a way he chooses to magnify his faithful character.