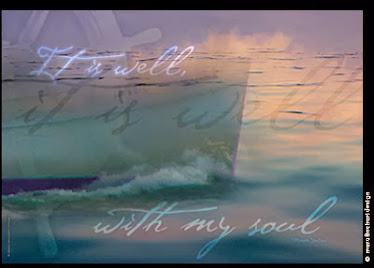 Horatio Spafford, author of the well-known hymn, “It is Well with My Soul,” knew that his life was a portrait of grace. He and his wife Anna, served God faithfully through the big, small, and unexpected events of their lives. When they were blessed with five children, they gave thanks to the Lord and followed him in joy. And when their only son died to scarlet fever, they continued to follow the Lord even in sorrow. This untimely death of their son, would mark the beginning of “sorrows like sea billows” rolling through their lives.

Mr. Spafford was a successful and wealthy attorney, but their lives were consumed with ministry. When they lost most of their investment property and financial resources in the Great Chicago Fire of the 1870s, instead of selfishly despairing, they served their now homeless neighbors, providing food and care for their grief-stricken friends.

As they recovered from the tradgedies of the months prior, an oppotunity arose for the Spaffords to travel to England for a vacation. While they were there, they planned to assist their friend D.L. Moody, in his evangelism efforts. Some unexpected business detained Mr. Spafford, so he sent his four daughters and wife before him, commiting to join them in England as soon as he could.

Midway through their voyage, the ship was struck by another vessel crossing the Atlantic. The Spaffords’ daughters perished in the sinking ship in spite of their mother’s efforts to save them. When Mr. Spafford got word, he immediately set sail to join his wife.

As Spafford’s ship apprached that dreadful location where the sea had swallowed up his precious girls, Spafford looked at those waters and preached the gospel to himself. He wrote:

Although he was weighed down with unimaginable grief, the good news of Jesus assured him that though all was very wrong around him, all was still well within him. By faith that made all the difference.

So, even today, we too must affirm that every river of peace and wave of sorrow we experience flow together by God’s sovereign storm-calming hand to assure us of His unwavering faithfulness. In those all too frequent moments when it feels that our souls will surely give way under the pressures of life, with the eyes of faith, we must look to the cross and remember that our greatest trial – separation from God – has been removed and dealt with in Jesus. “Praise The Lord, praise The Lord, O my soul!”