It’s a fitting end to our homeschool year. I just got off the phone with the mom of one of Stella’s unsaved friends from soccer. She invited us over for a playdate. That phone call was fruit of our feeble attempts to reach out. Well, actually more like Stella’s efforts reaching out. She would lie awake at night last fall burdened for her friend on her soccer team who didn’t know Jesus. She’d pray for her. And at the end of the season she wanted to invite her to church. So I helped her write out our church information on a slip of paper so she could give it to her. Then this spring soccer season, Matt and I followed Stella’s lead and tried to get to know her mom and dad better. 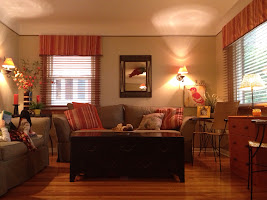 It’s funny because this whole homeschool thing from our perspective has never been so much about being within these four walls of our home. I know I can wrongly think these four walls are a fortress of protection against the world and if I can just inculcate our kids enough and micromanage their influences they will be safe from worldliness. But with one angry word and selfish action I see their hearts and remember that the world is in there, not out there. And there’s no wall big enough to save them from themselves. There’s no mom wise enough and no dad strong enough to dominate their rebel hearts into submission. But “if they are among those whom God has chosen for eternal life, Jesus will have them as His subjects.” (Starr Meade) So it’s not about my kingdom on Keppen. It’s about King Jesus’ kingdom and how we fit into His reign.

And I’m preaching this to myself over and over and over. Because how can I hold these dear ones loosely when all I want to do is hold them closely? How can I convince myself they’ve never really been mine, but His to steward, when with each step they take away from me I have to restrain myself from chasing them down and bringing them back near? How can I give them life and then gladly lay down my life for them? This task of mothering is for women of steel and I’m just weak and vulnerable.

When I’m about to be overcome with grief and give way to the crisis of my identity, I remember a Father who saw His Son walk away from Him for the promise of something better. The covenant conversation from Isaiah 53 between God the Father and God the Son comforts me. “If you give your soul as an offering for sin, I will give you a people.” So it pleased the Father to let Him go. It satisfied Him to see His Son suffer among the transgressors because of what it was accomplishing – bringing many more sons and daughters to glory.

I’m reminded God doesn’t ask anything of me He hasn’t already done for me. Perfect obedience positionally and grace to obey practically are mine. So I can let them grow and go because He’s in control of them, working His own good purposes to expand His kingdom. And ultimately, I really do want them to follow Him, not me. I want them to hear His voice, and for it to be more familiar and precious than mine. I want them to come to know His gentle arms when they need comforted and trust His strong hand when they’re used to reaching up for mine.

A wise woman builds her house. But she’s wiser still if she remembers the four walls of it are but a small part of the much bigger kingdom He is building.