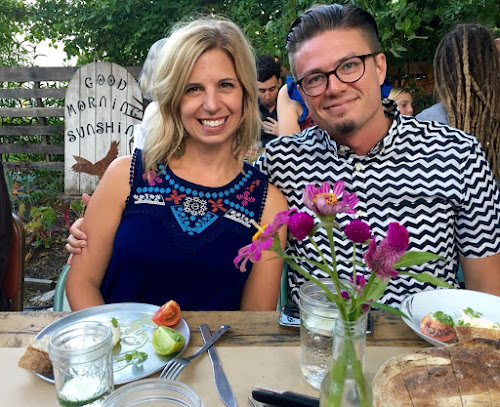 I listened to you preach on Sunday, watching you form your words and pull that passion right out of your heart. I knew the Word had kept you up late and got you up early and it needed to come out. And I was praying for you, assuring you even though I couldn’t help you carry the burden of your care for the church, that I could carry you.

And as I listened and saw your wet eyes at the thought of the cords of love that have tightly bound you to him, I took that Word from your heart to mine and couldn’t help but thank God for it and for who he is making you.

They say the longer you’re married, the more people you marry. And I think it’s true because I married many different versions of Matthew Owen these 14 years. I married the young energetic one with boyish enthusiasm and loads of ambition. The one who drove me and my mom around Greenville with reckless abandon, hair blowing in the wind in our rented convertible. I married the seminary student pulling all-nighters drinking coke and coffee by the cups full, never turning down an opportunity to socialize or give his opinion. I married the one hesitant to become a father and then watched his heart fold in tenderness cradling our newborns, resolute in disciplining our toddlers, and compassionate in nurturing our tweens. I married the dad who rises and bends with all the back-breaking and heart-wrenching duties of fatherhood. I married the entry-level call center employee who worked his way up to Audi Business Analyst, being offered a job from a competing marketing company with the salary and perks to boot. I married the one who thanked God for the opportunity but turned it down because pastoral ministry was calling him louder. I married the man who had to tie that call to the altar and give it to the Lord, not knowing if he’d ever see it again. I married the one who knelt before our MI church congregation, since the Lord did give him that desire of his heart, and watched them ordain him to be a minister of the gospel. I married the man who needed me by his bedside off and on for two years while he fought a strange, troubling and sometimes debilitating physical illness. I married the one who rose up out of that bed of affliction, and has never stopped humbly acknowledging his dependence on God for his next step and breath. I married the man who realized his ambition alone couldn’t make things happen and his opinions didn’t really matter that much. And I married the man who took a chance on the girl from a broken home who had no religious pedigree in which to boast, and commit to give me his name and trust me with his heart.

I still have to pinch myself and thank God that I married this man. What do I have that I haven’t received?

On our 14th anniversary, I thank God for the Matthew Owen you are today. I don’t know what man I’ll have married in five more years or ten, but I pray that God will use each trial, each joy, each success, and each failure to make you more and more like Jesus. I see him restoring his image in you and I like the way it looks. Even better than Leonardo DiCaprio.