Skip to content
My last post over five months ago, was written through tears of disappointment because God had used us in a birthmom’s life in a way we wouldn’t have chosen – being there for her through the struggle of her uncertainty, ready to welcome her baby into our family as our own, but then being called to rejoice with her as on her way to the hospital she called saying she was choosing to parent her child. After we hung up the phone from that call, without wasting much time, we went through the house putting away the pack and play, the car seat waiting to be grabbed on the way out the door to the hospital, and the pink onesies and sleepers ready to dress Aaliyah, our anticipated baby girl.
It wasn’t primarily for me we cleared away reminders of the bundle who wasn’t coming home, but because we knew who would be coming home in just a few hours. The trio of blessings God had called us to parent. And we didn’t want to make the sight of unfulfilled hopes harder for them to bear.

I laid with Stella in her bed later that afternoon as she sobbed heartbroken, hugging her and wiping her cheeks, blotchy from tears. I couldn’t help but wonder how navigating the peaks and valleys of emotions associated with adoption might effect her heart and view of God. But that was out of my control. As a family we talked through it, prayed about it, and grabbed onto the same truth that had us securely strapped in all along.

So we were not greatly shaken when our second adoption fell through a few months later. We opened our hearts to learn and be and receive whatever God wanted, and prayed for baby Shiloh and his future without us.

Then God surprised us again today, as he loves to do in adoption. But not with a baby to hold. Instead with a third place ribbon around her neck from Stella’s speech contest. She competed against over 200 students and placed for her speech articulating why adoption is important. In it she said how adoption has helped her understand birth parents who are in situations so different from hers. She concluded that together we are loud in supporting adoption and helping children have loving homes.

Once again, God has reminded me that he has not wasted these last three years as we’ve been waiting for an adoption match to finalize. Through it, he is working in our hearts – and our kids’ hearts – every step of the way. So even though we never got to kiss Aaliyah or snuggle Shiloh close, God has used them to draw us and our Stella, Ruby, and Schaeffer, nearer to his heart. This medal will continue to be a visible reminder to us that our empty arms are not an indication that God is slow in keeping his promises. Instead, he is patient, not wanting anyone to perish, but everyone to come to repentance. (2 Peter 3:9) So we ask again, keep working in us and through us for your purposes, Lord! 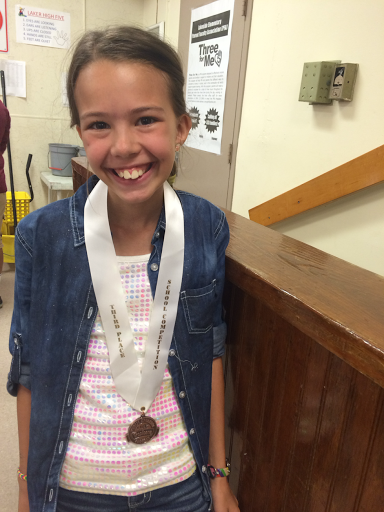