(Note: This article originally appeared here in January 2013. It is a significant part of the story of our adoption journey and we want it documented in this current series.)

On this 40th anniversary of the Supreme Court’s landmark decision legalizing abortion on demand in all fifty states, I want to publicly thank my mom for choosing life. In doing so, I am in no way criticizing birth mothers who choose life and bravely made an adoption plan for their baby. I am also not degrading those who had an abortion and have lived with regret and remorse. I hope to write more on that later in the week. And, I am certainly not advocating that the biblical view of the married two parent family can be set aside because it’s old fashioned and unnecessary in the 21st century.

What I do hope to show is that grace is greater than sin.

When I stand outside the abortion clinic in Dearborn, I see the young girls and women who pull in, alone, desperate, conflicted, and down right terrified, and imagine an 18-year-old named Jodie feeling those same things. I see one light a cigarette, inhaling and exhaling a few times, hoping to draw some courage from the nicotine to take the next few steps. I see her glance around at us there on the sidewalk, ready to offer help, and turn her head away quickly so as not to meet our eyes. Then I see her get out of her car, throw her cigarette on the ground, extinguish it with her foot, and set her gaze on the entrance door. As we call out to her, I know she wants to believe what we’re saying is true. I know she wants to believe that there are other options. That even though her life will be hard, she can make it. That she really isn’t alone. But she keeps moving forward anyway, trying to silence the voices. About ready to reach out for the door handle, she abruptly turns around, running back to the car with tears streaming down her face. It seems she changed her mind! She starts her car and speeds out of the parking lot.

That might seem like a happy ending. And, indeed, it certainly is for the most important chapter. But the story is nowhere near over and so I weep for her still. Because even if she chooses life and to raise her baby, I know how incredibly hard it’s going to be for her. I know the jobs she’ll have to settle for just to make ends meet. I know the social life she’ll give up, because really, who wants to date a girl who admits she has a 1-year-old at home? I know the academic and vocational dreams that will be put on hold, some permanently, because her attention will be divided. I know the family tensions that will be present because of the constantly pressing need to find childcare and, at some points, even housing. I know the financial strain that will weigh on her day in and day out. And I know because Jodie did choose life. She allowed me to be born alive – not dead – as she could’ve easily done in her circumstances in 1975. And God has shown me much grace through that scared and lonely teen mom, who allowed me to take my first breath.

Not only did she give me life, but she also sustained my life. I don’t believe we are captive to the doom and gloom statistics I hear regarding babies born out of unwanted pregnancies, because I believe in a God who is sovereign over statistics. He can take desperate situations and heart breaking realities and weave a beautiful tapestry, sewn with a blood-red thread, pointing to the cross that breaks the power of sin and death. He can turn the hearts of the mothers toward their children, motivated with all the natural affection common grace can offer. And I know because God did that for us. 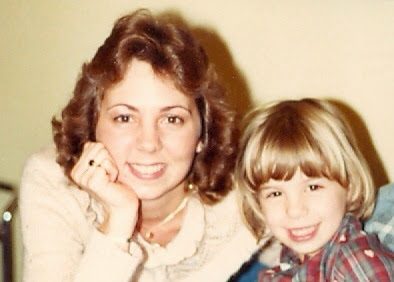 My mom taught me many good things precisely because of our difficult circumstances. I would not have learned these hard lessons to the same degree otherwise.

1) There is something worse than taking nine years to complete your undergrad degree. Many women have climbed the corporate ladder successfully, stepping on toes all the way up. For some women, the most injured in the process, aren’t the co-workers they’ve jilted and undermined to get where they are. At the bottom of the corporate ladder are thousands of babies, crushed underfoot, as their moms chose their death over the potential death of their career.

My mom’s climb was incremental and slow, but as a successful business woman at age 55, she’s shown me that pragmatism is no way to live your life. It’s good to have big dreams, but not at all costs. She taught me it not only matters where you end up, but how you get there. And I got to have a small part in her climb.

While most parents were pulling all-nighters helping their kids complete last minute projects (and believe me, we did that too!), I was proofreading her papers. Every weekend seemed to be “Take Your Daughter to Work Day” for us. When she worked in accounting, I’d help her sort checks in numerical order, count change from the vending machines, and any other small task that would help her get it all done. I remember staying up into the wee hours to help her complete a huge project for her marketing class. Who knows how many magazines we scoured and cut our way through looking for examples of different advertising layouts.

Mom taught me it’s good to reach the top, but it’s even better to get there the right way.

2) You can choose life precisely because of the Women’s Rights Movement. They want you to believe having a baby will ruin you, but it is that equality for women that allows you to give birth and still have opportunity. Anne-Marie Slaughter might be right that Women Still Can’t Have It All, but that doesn’t mean they can’t have anything. Her article was fairly pro-family for a feminist writer, but still, I shudder to think how many abortions it set in motion. Even if the “arc of a successful career” isn’t just right, or in my mom’s case, is completely wrong, chances are, you still have a good shot at success.

3) Life is hard. I knew about interpersonal struggles, financial problems, death, and abandonment at a young age. My naive, rose-colored glasses of adolescence weren’t in place for long. But that has been a good thing. I was under no impression that my ultimate hope was in this world. I knew how messed up it was. And in time, as God showed me where true hope could be found, I appreciated even more the bright promise of eternal life against the dark backdrop of this sinful world I knew.

So as my mom taught me, we too want our kids to know sin, in their own hearts first, has consequences. We want them to see that sin makes life hard. We even want them to see us struggle through sin and argue from time to time. Because in our marriages, families, and churches we need people who don’t blush at sin. Who aren’t shocked by it, and who don’t ignore, minimize, or hide it, but know how to deal with it. We need people who are less prone to throw the first stone and more prone to see the Physician came, not for the well, but for the terminally sin-sick. And that’s all. of. us. We need people to love God and others much because they realize they are the ones who have been forgiven much.

4) You can be your child’s friend. It has been said that teen moms and their kids grow up together. In some sense that’s true. And there are advantages to it. Like sharing clothes, shoes, and make-up! But really, in all honesty, I liked being with Mom. She told me “no” on the important things, but she also said “yes” to a lot of unimportant things. She didn’t parent for my approval, but she also didn’t distance herself from me. We were a team. “Just the two of us. We can make it if we try. Just the two of us, you and I,” we’d sing in the car together. And my friends would envy our closeness as she and I would sing what we called “our song,” Huey Lewis’ “Happy to be Stuck With You.” We even had our own choreographed hand motions to go along with it.

5) Grace overcomes guilt. Being a mom is a guilt-laden profession. I’ve said before, I’m only seven and a half years into it and already have a long list of regrets. I can’t imagine what it must feel like to start out with the cards stacked against you, so to speak, and to be fighting an uphill battle.

But, I’ve seen grace abound where sin abounded. I’ve seen joy and peace surface where there was none before. And I’ve seen a mother and daughter emerge from the battle, scarred and wounded, but hand in hand, because God offers forgiveness. And, to be honest, even those wounds are sweet, because they tell of His protection when Satan would’ve been pleased to devour us. They point to His power to seek and save, and keep what is His, at all costs. Even His own life. And because of that very good news, Mom and I can face our past, each other, and the future, through the power of His indestructible life.

Life. That’s what this day is about. Life here and now. Fight for it. Give it. Sustain it. And eternal life to come. Preach it to yourself first, then share it with the world who so desperately needs saved from all this death.

One thought on “Nobody Said Choosing Life Was Easy”