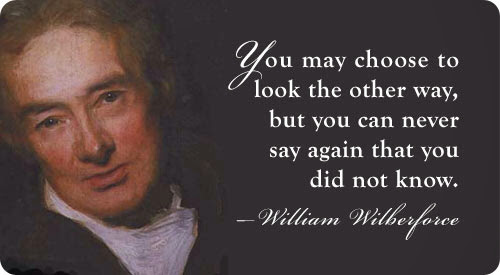 Early in 2012, God orchestrated a few circumstances that challenged us in our thinking and consequently, our action. I read a biography of William Wilberforce and John Newton and we watched Amazing Grace, a movie about their fight against the slave trade. We also were educating our girls more about the Civil Rights Movement and in turn got more of an education ourselves. Matt encouraged us to identify what the main civil rights issue was of our day that we were ignoring like so many white-privileged Christians had done in the past with the issue of slavery. We became convinced the issue in our day was *abortion. Obviously, some Christians (and Catholics for that matter) had been fighting for life for decades before, but we had never personally gotten involved in actively trying to speak up for the most fundamental right – the right to live – of those who couldn’t speak for themselves. *(Interestingly, earlier this year, Thabiti Anyabwile, posts his similar conclusion here.)

We weren’t sure exactly where to get started, but explored an opportunity with a ministry called 40 Days for Life which we heard about through our homeschool co-op. We visited an abortion clinic near us to hold a peaceful prayer vigil organized by that ministry. We also attended a memorial service for babies whose lives had been taken there within the past year. It was on these occasions we became acquainted with a woman named Kim Bean, leader of the Dearborn chapter of 40 Days for Life.

Kim is one of the most approrpriately compassionate people I’ve ever met. I say appropriately, because she isn’t controlled by her emotions (although she feels the right things passionately) and she opens her mouth discerningly, with great wisdom. Her influence was unforgettable.

Around this time, not realizing how the two tracks would eventually coincide, God also crossed our lives with a few families, also from our homeschool co-op, who had adopted transracially. We were praying about adding to our family again and had considered the possibility of adoption, but were still very uninformed. With these new friends, I had the chance to get some of our questions answered. I would sit in the nursery when it was our time to serve together and just grill them with questions. I also got to see them interact together as families and some of my uneducated apprehensions were dissolving.

In May of 2012, we attended our first meeting at Bethany Christian Services in Madison Heights, to gather more information about the possibility of adopting. Sadly, the main things we took away from that first meeting were that there was an overwhelming need, particularly for minority adoptions, and that it was overwhelmingly expensive! We knew we didn’t have that kind of money and left less certain than we were before that this was something God would have us pursue.