[Thomas] said to [the other disciples], “Unless I see the nail marks in his hands and put my finger where the nails were, and put my hand into his side, I will not believe.” Then [Jesus] said to Thomas, “Put your finger here; see my hands. Reach out your hand and put it into my side. Stop doubting and believe.” Thomas said to him, “My Lord and my God!” Then Jesus told him, “Because you have seen me, you have believed; but blessed are those who have not seen and yet have believed.” (John 20:25, 27-29)

Too often I can relate to the infamously nicknamed “Doubting Thomas” in the verses above — the one who needed to see before he believed.

Not anymore though. Today he sees face to face.

He knew there was a seeing with the eyes of his heart first that was more important than seeing with his physical eyes. And I know he’d want me to tell you, as well, to, “[S]ee that the Lord is good; blessed is the one who takes refuge in him.” (Psalm 34:8)

Happy 53rd Birthday, to the uncle who pulled my first loose teeth, showed me how to rake leaves, and most importantly, taught me how to walk by faith. 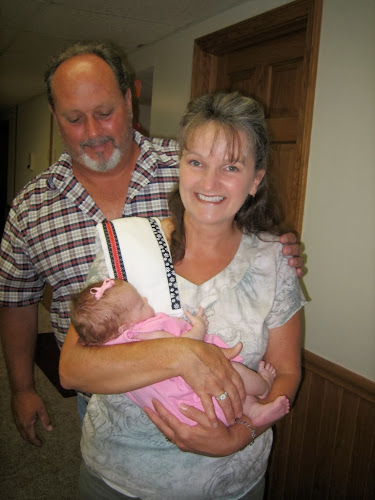 Uncle Tommy and Aunt Brenda with Ruby in 2008