Skip to content
It has been said that being a mom is a thankless job. Days are spent doing things no one notices. The paparazzi’s not hiding in our bushes to snap pictures of us unloading our screaming kids from the van. No one is dying to interview us on our latest bedtime routine, hoping this one will keep them in bed at night. There are no Yahoo! headlines spotlighting a mom who picks up the same toys 20 times a day only to have them thrown all over the house another 20 times that same day. Nor is there a newspaper spread featuring a mother elated over the rare pleasure of finding all the matching socks as she folds her laundry.
Our hearts crave the spotlight and the feeling that we’re doing something significant, something that really matters. When these desires aren’t met, we are tempted to grow embittered about or weary of our tasks, doing them half-heartedly or not at all. Our focus wanders from what we should be doing to what we think is worthwhile and will satisfy our desires for joy.
Maybe you’re a nurse and the weariness of ungrateful and sometimes belligerent patients wears you down to the point that you wonder if the money is even worth it. Maybe you are a teacher and are tired of disrespectful students and blame-shifting parents who take the fun out of a job you used to enjoy. The particulars might be different, but regardless of our set of duties, our struggles are the same.
One morning as we were working through a catechism focusing on Jesus’ humiliation and exaltation, I asked the girls to name some ways Jesus showed humility during His time on earth. Ruby responded, “When He fed people.” It took a minute for me to grasp the profundity of her response. She got it absolutely right! I never thought of His providing meals for people as an act of humble service. He had heavenly priorities and although He needed to eat too, He could have seen their request for food as an inconvenience to the more important things He was trying to accomplish. But He didn’t. He used this basic necessity to serve them and teach them.
I chuckled to myself as this image popped into my head: 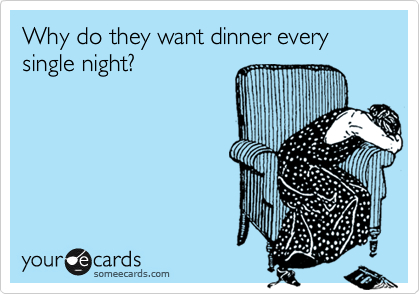 I have felt like this on many occasions, especially when I’m engrossed in a project or task and know the clock is marching on toward that hour when all chaos will break loose if I don’t have food ready for the savages formerly known as my children. So, I begrudgingly pull myself away from what I really want to be doing to do what they need me do.
But since Ruby made that convicting comment, I have found new significance in doing the many mundane tasks required of me. Not because the tasks in and of themselves have gotten more joyful, but because I have been more aware of Jesus’ service for us.
He ministered in relative obscurity for thirty years. When few were looking or aware, He was accomplishing things of eternal significance – like securing our salvation! He was busy fulfilling all righteousness for those He came to save. So much for judging the significance of my work by what is noticed or unnoticed. There is One who is always watching and His audience is the one that matters most.
And then with the inauguration of His public ministry, when more people were aware of this Jesus of Nazareth, we still find Him meeting people’s most basic needs – like eating, walking, drinking, and seeing. He even took time to invite the little ones near. I have often been challenged by the King of Heaven’s kindess to the children! He didn’t see them as interrupting His more majestic plans. They were His plan then just like they are His plan for me now. So I have taken time to kiss that 15th skinned knee of the day and look into those tear-filled eyes to let them know I care (and to tell them to shake it off, if need be!). Because if He had time, I certainly have time.
And those patient deeds of love and service weren’t merely decorative details to the story of redemption. They were a significant part of His accomplishing all He came to do. As John states, referring to the many acts of Jesus recounted in his gospel, “[T]hese are written that you may believe that Jesus is the Messiah, the Son of God, and that by believing you may have life in his name.” (John 20:31)
As we follow Jesus’ footsteps, we too learn to embrace the reality that the path is before the crown. But the fact that a reward is coming helps us serve like it helped Him endure. So for the joy set before us, let’s stir that soup on the stove, sweep up those multiplying crumbs, wash and fold (and even put away!) those mounds of laundry. The reward for our humble labors will not be lost! Even all those bottles and sippy cups we fill and refill for our kids as service to Him will be rewarded! (Matthew 10:42)
Our selfless obedience shines light on God’s great character, in a similar way Jesus’ did. So like Him, we can use our humble stage to spotlight the One who deserves all glory and honor and power and blessing for ever and ever! Meanwhile, an amazing thing is sure to happen. As He receives the glory, we will find satisfaction in performing even the most menial task. It’s the way He made us. Living for His glory really does result in our greatest joy!
Jesus did not come to be served, but to serve and give His life a ransom for many. (Matthew 20:28) And who am I to think this servant is greater than her Master? (John 13:16)