In September of 2010, I went to my first True Woman Conference. There was at least one male attendee among the hundreds of women there. His name was Joel Schaeffer Owen and, the four month old bundle of baby boy, was with me.

I was still pretty overwhelmed at the fact of having a boy. There had been little question in my mind of how to train the girls early on, pointing them to the gospel first, but then to biblical femininity and striving to model it for them, although imperfectly, for sure. But, not growing up with a dad and not having any brothers, made me insecure about how to interact with a boy and how to train him in biblical masculinity. Matt was quick to comfort, assuring me a large part of that job was his, and we’d work together on it. But, of course, the boy would still be spending almost all of his time with me for at least 5 years so I still had some things to figure out.

By the end of the conference, ironically exclusively for women, my mind was at ease and I had confidence in a significant contribution I could have in raising our son. I realized one of the best thing I could do for him as his mom, was to embrace my womanhood for the glory of Christ. (Read here for exactly what I mean by that.) I needed to strive to manifest the wisdom of God’s design in creating us differently, male and female. To show him we are purposefully intended to be different, so God could get all the glory for His brilliance in the created order. So I left committed, more than ever, to using my womanhood in an effort to display God’s greatness before my son’s eyes.

Now, almost three years later, I’m much more acclimated to most things boy. But, even still, I struggle. The other night I was asking Matt what is it about boys that make them act before thinking. Schaeffer’s aggressive impulsiveness is such a mystery to me and I am constantly addressing it with him. I had an “Aha!” moment when Matt explained, “The good aspect of God making us like that is so we run toward the fight instead of away from it!” With images of Boston fresh on my mind, Matt’s words made me worship God right then and there. There are so many facets to our amazing God! I just keep turning Him and observing Him from the different angles, displayed in His creating people and nature in general, and am constantly breath-taken!

“Keep showing me Yourself, Lord, through the husband and son you’ve placed in my life! I want to know more of You through the way You made them!” 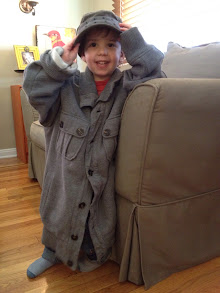 A few days ago, Matt forwarded me a helpful (and beautiful) article on the topic of manhood. Another piece of the man-puzzle came together for me. (And they say we’re the complicated ones! ;). The author describes, in even more detail, what I have been searching for in knowing how to interact with Schaeffer.

“[His mother is] suspicious of women who like to keep their boys in diapers, as it were. So she nudges Luke toward her husband. She buys them the same kinds of clothes. She admires Luke’s skill in hitting a ball, or painting, or building a tepee—whatever he sets his heart upon.

She becomes to him the best of girls, even when he doesn’t know he likes girls yet. She never ceases to be his mother and to command his respect, but she will also claim his duty as her protector. If the groceries are heavy, she asks him to handle them, knowing that eventually he will overmatch her in strength. When that day comes she’ll boast about it to her friends.

Her love for him is necessarily a love for his nature as a boy. One cannot say, “I love my terrier Whitey, but I wish he wouldn’t wag his tail.” She wants him to grow up to be a man whom a good woman would marry. She cannot encourage that by personal example. She encourages it rather by showing the love of a woman for her husband, regardless of the sparks that attend every union of the sexes. And she encourages it by expectation. She calls him to manhood by letting him practice being the man: as a mother teaches her son to “lead” her in a formal dance.”

Everytime I read that excerpt I tear up. Partly because it is hard to let go of my growing boy. But partly because, since he has to grow, I desperately want him to grow to be the right kind of man. After pointing him to the gospel, the main way to help him to that end continues to be pretty straightforward. Be the woman God intended me to be and let him practice being – and by God’s grace someday he’ll actually become – the kind of godly man I’d want to marry. And, if I do say so myself, I have excellent taste in men.