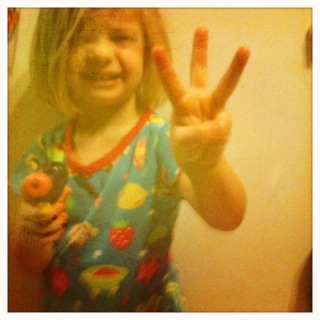 Usually, on a birthday post, I would reminisce about your different milestones and accomplishments of the year. However, on your 3rd birthday, as I look back, the things that actually stand out most to me are the milestones I have reached because of you.

When Stella went to school last fall, I barely knew the little two-year-old sitting across the table from me at lunch. I think I only saw the challenges your spiritedness provided. As the months passed, my eyes were opened to a new world of appreciation for the unique way God made you – so different from your sister and so different from me.
I often felt like I was going back to the beginning with this whole parenting thing. You made me see things from a perspective I never would’ve considered. You helped me realize, even in parenting, love doesn’t believe the worst. Rather, “Love…is ever ready to believe the best of every person.” (I Cor 13:7) And so I had new eyes to watch some of God’s beautiful image in you, though still in need of redemption, being expressed.
Mostly, though, you’ve confronted me with my own selfishness. You wanted to go outside when I would’ve preferred to stay in. You wanted to run around when I wanted to color with you. You weren’t interested in sitting and being drilled on your ABCs. You had to interact, physically handling the magnetic letters and putting them on the fridge as I tried to teach you. And, to be honest, I still don’t know if you know your ABCs. And I learned that’s OK too. We’ll keep working on them. Even in parenting, my agenda isn’t the ultimate agenda. God is using you to work on me as He uses me to work on you. I think, in my pride, I had forgotten the first part of the equation. The humbling bottom line is, you have helped me see how far I have to go and how much I have to learn.
Rufey Jean, we love so much about you. We love your determination, your strong will, your nurturing compassion, your competitive fearlessness, and your empathy.
You remind me of another Ruby. One I read about in John Piper’s book, Don’t Waste Your Life, during my first few years of marriage. Here’s her story:

“In April 2000, Ruby Eliason and Laura Edwards were killed in Cameroon, West Africa. Ruby was over eighty. Single all her life, she poured it out for one great thing: to make Jesus Christ known among the unreached, the poor, and the sick. Laura was a widow, a medical doctor, pushing eighty years old, and serving at Ruby’s side in Cameroon. The brakes failed, the car went over a cliff, and they were both killed instantly. I asked my congregation: Was that a tragedy? Two lives, driven by one great passion, namely, to be spent in unheralded service to the perishing poor for the glory of Jesus Christ—even two decades after most of their American counterparts had retired to throw away their lives on trifles. No, that is not a tragedy. That is a glory. These lives were not wasted. And these lives were not lost. ‘“Whoever loses his life for my sake and the gospel’s will save it”’ (Mark 8:35).”

Dear Ruby! We see the same determined passion in you as was in Ruby Eliason. But not yet set on that ‘one great thing’ – God and His glory for the good of others. So we continue to plead with God to save you and direct your energies and empathies to His service and His way.
Thank you for what you’re teaching me, Rufey Jean. I love all the spiritedness your 24-pound little body holds (and even the overflow which can’t be contained in your tiny frame!).  We’re going to run our legs off today in your honor…and I better get a head start! Happy 3rd Birthday!

One thought on “I Love Being Ruby’s Mom”